The expression of negation is a fundamental, universal feature of natural languages. However, the basic nature of the logical operation involved should not mask the complexity of its expression in the world’s languages, and the broad spectrum of semantic and pragmatic interpretations involved. This lecture will investigate in  particular emphatic (or “strengthened”) ways to express negation, such as the use of expressions like “absolutely”, “at all”, “any”, “even”, “the least bit” in combination with negation. We will compare strategies from different languages in search of commonalities both in the forms that are chosen and in the communicative needs that motivate negation strengthening. We will also follow the course of these constructions over time: we will see that they are frequently subject to change, since they tend to lose their expressive power with overuse. The way these structures change is rooted in the interactional nature of communication and is very telling with respect to some general mechanisms that underlie the historical development of language systems. 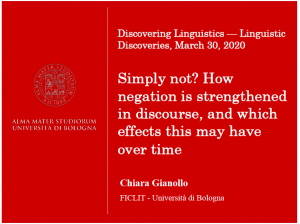 Chiara Gianollo is professor of general and historical linguistics at the University of Bologna. She obtained her MA and PhD from the University of Pisa and has held appointments as lecturer and researcher at the Universities of Trieste, Konstanz, Stuttgart, and Cologne. Her main research areas are diachronic syntax and semantics, with specific focus on the use of formal theoretical linguistics to investigate the history of Greek, Latin, and Old Romance. She is the co-editor, with Agnes Jäger and Doris Penka, of “Language Change at the Syntax-Semantics Interface” (de Gruyter 2015) and the author of “Indefinites between Latin and Romance” (Oxford University Press 2018).