Modals like must express both meanings of root obligation (You must brush your teeth) and epistemic inference (That must be the mailman at the door). Modal verbs generally exhibit cyclic patterns of language change, where root modal lexemes first acquire epistemic interpretations (Traugott, 1989; Bybee et al., 1994), becoming meaning-variable, and slowly lose all conservative root uses (D’Arcy & Tagliamonte, 2007), before being lost altogether as they are replaced by renewing items (see van Gelderen, 2004). The process of increasing novel uses (e.g., more epistemic uses in more grammatical contexts) with successive generations is called incrementation (Labov, 2001). While children theoretically play a central role in this and other language change processes (Labov, 2001; see also Lightfoot, 1991; van Gelderen, 2004, i.a.), child language evidence is rare and virtually absent for syntax-semantic variation. I present data from three experiments on child (n= 152) and adult (n= 29) comprehension of must in Toronto English, showing that older preschool-aged children show epistemic interpretation biases beyond that of adults from the same speech community (incrementation), and avoid must usage more often than adults from the same speech community (loss). Both of these results are in line with language change predictions for modals like must (Cournane & Pérez-Leroux, 2020), and can be independently accounted for by regular language acquisition processes (syntax-semantics mapping for the former, and overlapping felicity for the latter). 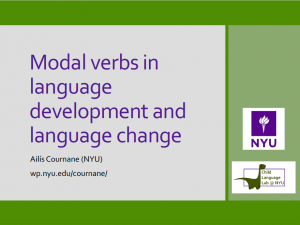 Ailís Cournane is Assistant Professor at the Department of Linguistics, New York University. She directs the Child Language Lab @ NYU. She holds an MA and PhD from the University of Toronto (Canada). Prior to joining NYU, she worked at the University of Mannheim (Germany). Her research focuses on how children learn what words and structures mean, and how this learning process relates to the way languages change over time. The domain of language she focuses most on is linguistic modality (e.g., must, have to, can, maybe), an area of language that expresses uncertain or non-actual information. She uses a variety of corpus and experimental methods to explore modality in child language.