In the past few years, rapid technological progress and the democratization of the Web 2.0 have led to the successful creation and development of several dialectological initiatives. In terms of data collection, several alternatives to traditional fieldwork have emerged: thanks to the Internet and social networks, it is now possible to conduct dialectological surveys without having to travel. In terms of data analysis and visualization, it is now much less expensive to create atlases, make them available to the academic community and interpret the data. In this talk, I will present some of the most successful projects that have been conducted so far in the field of crowdsourced dialectology. Various examples from English, French, Italian, German and Spanish will be taken. 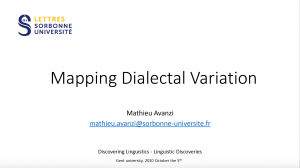 Mathieu Avanzi defended a thesis on the syntax/intonation interface of French in 2011, and made several postdoctoral stays in Belgium (Louvain-la-Neuve), France (Paris), UK (Cambridge) and Switzerland (Bern, Geneva , Neuchâtel and Zurich). He is currently assistant professor Sorbonne University (Paris IV). His current work focuses on geographical variation of French and Gallo-Romance dialects, topics to which he has devoted several papers, atlases and a blog (www.francaisdenosregions.com).